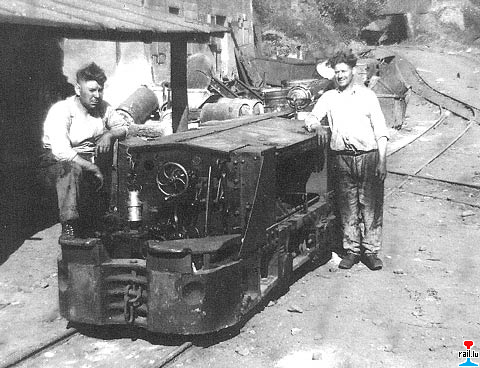 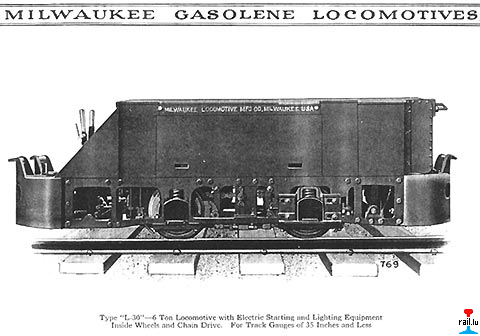 The Milwaukee Locomotive Manufacturing Company was organized under the laws of Wisconsin in October of 1907 and was in the internal combustion locomotive manufacturing business since 1909. Milwaukee locomotives production grew from 2 ton locomotives in the early days to 20 tons in the later years.
Milwaukee only produced 4 wheel locomotives equipped with the gasoline engines and mechanical transmissions. They were available in gages from 18 to 56.5 inches.

Originally Milwaukee's manufacturing operations were conducted separately, but shortly after, and certainly by 1910, their manufacturing was carried on as a department of the National Brake & Electric Company of Milwaukee, which in turn had been a wholly owned subsidiary of the Westinghouse Air Brake Company since prior to 1910.

On July 19, 1932, Whitcomb Locomotive Company acquired the Milwaukee Locomotive Manufacturing Company from Westinghouse Air Brake Company, in an arrangement whereby Westinghouse became a stockholder in Whitcomb Locomotive Company. This acquisition included the business, it's inventory and the good will of the company. The inventory was completely transferred to the Rochelle plant of Whitcomb and included 30 locomotives ranging in size from 4 to 16 tons, a large stock of repair parts, records, patterns and necessary machine tooling. This was done to insure present and prospective owners of Milwaukee locomotives they would have an uninterrupted, efficient and permanent source of parts and service. Whitcomb also received four completed locomotives that were stored and available for immediate sale on the Pacific Coast.

The production records of Milwaukee Locomotive were stored at the East Pittsburgh, PA office of Westinghouse Air Brake Company. These records were never turned over to Baldwin or Whitcomb at the time of the sale. Westinghouse is known to have later disposed of these records. I have been unable to locate any construction number listing for Milwaukee locomotives. If anyone has this information, please contact me.

The early W class models were of a crude design that resembled a wagon having wheels underneath that carried a pan above in which the engine and transmission were held and a space was provided for the operator. They had cast steel end sills and individual pedestals that were attached to the pan. Later W class locomotives utilized cast pans. These locomotives were of a very rudimentary design. Heavier A & C class locomotives were short center cab designs, but still utilized the wagon design. In the early years, Milwaukee used a class designation system that was a Letter followed by a Horsepower Number. Early Classes included W, A, & C. These were all 4 wheel locomotives equipped with 4 cylinder 4 cycle gasoline engines and had open chain
drives.

By about 1920, Milwaukee introduced their Friction Drive locomotive, a class F-25. This was a 25HP, 4 ton locomotive with Friction Drive and
a peaked hood and cab. It is believed that this was the first Milwaukee locomotive to include the new style Modine section core radiator bearing the familiar Milwaukee name.

In 1924, Milwaukee introduced their new H class. This was the first time that Milwaukee's locomotives took on the appearance of strength and mass. Even the small locomotives had the appearance of strength. This class effectively replaced prior classes W and F. The Class A, C & G locomotives had already been discontinued. The mining classes M and L remained largely unchanged. At this point, they appear to be starting to seriously threaten Whitcomb's customer base.

By 1929, Milwaukee introduced their Class J locomotives. These were an economical alternative to the class H locomotive, but were only offered in gages between 18" and 42". They used the Hercules 4 cylinder model OX engine, with it's 4x5" bore & stroke that developed 40 HP at 1400 RPM. This was directly bolted to a standard four speed heavy duty truck transmission and in turn created a unit type of construction. This class of locomotives was offered in J-4 and J-4.5
models (4 tons & 4.5 tons) that were capable of 13 MPH maximum. The frames were composed of solid cast semi-steel sideframes attached to reinforced channel iron end sills. This class also used the Modine sectional core radiators bearing the Milwaukee name cast across their tops. 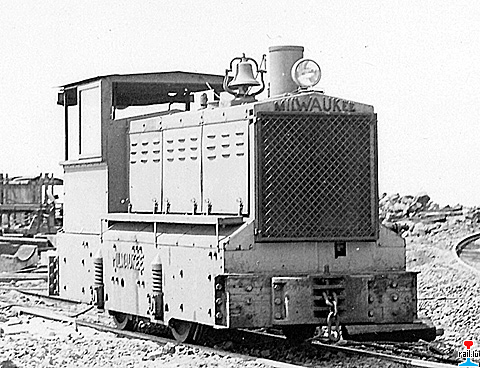 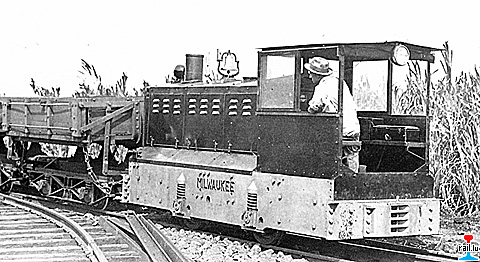 Military railroads of Hawaii. In a locomotive list prepared many years ago there is a U.S. Army H-12C Milwaukee locomotive with a build date of 1934 and construction number 873. The gentleman who prepared the list did not reference his sources so we are unable to verify any of the information. The only reference information we have is a reprint of a 1930 Milwaukee catalog. The attached photos appear to be identical to the 1930 catalog cut of a H-12 with the exception of four bolt heads in the corners of the side frames. The photos are from the National Archives, Record Group 77, MILITARY CONSTRUCTION FINAL REPORTS, 1934-1938, Box 24A Location: 2159E (entry 94, 1975 PI). These locomotives were used in the construction of Fort Barrette, ca. 1932, and likely remained there to service the two 16 inch guns with powder and shell from the magazines. Since the only difference we can find between the H-12 and the H-14 is the two additional tons and a drawbar pull of 7,000 lbs. at 2 and 4 MPH for the H-14 vice 6,000 lbs. for the H-12, we are of the opinion that the four bolts at the side frame corners are retaining 1,000 lb. cast weights and these photos show Milwaukee H-14s in service.
Jeff Livingston, historian of the Hawaiian Railway Society (HRS), island of Oahu, Hawaii